Over the last 40 years, there has been a 'relational' Zeitgeist - some call it a "relational turn" that can be discerned across fields of both therapy and research. I frequently hear therapists declare they are relational or that they work "at relational depth". In the research world, also, it seems more researchers are embracing collaborative, dialogical or relational-centred approaches.

I think we would all agree that as humans we are shaped by our social contexts and that our sense of who we are is intimately entwined with our relationships. Research also demonstrates close relationships are what matters most to people. When those relationships break down or fail to give us what we need, we become distressed/disturbed and lose confidence. If relationships are the source of many psychological problems, they can also be harnessed towards growth, healing and understanding.

More than this general acceptance of the relational context of human experience, some practitioners (and I am one of them) promote the therapeutic/research relationship, rather than the individual client/participant, as the primary focus of therapy/research. Here, we’d argue that the only access we have to another’s subjectivity comes through the relationship so that must be the vehicle of the therapy/research.

The relational turn in therapy

Key general principles of an explicitly ‘relational’ psychotherapeutic approach include:

In summary, working relationally means engaging the emergent, here-and-now dialogical relationship between therapist and client where we flexibly attune to each client’s relational needs (Erskine, 2015; Erskine et al, 1999, DeYoung, 2003; Spinelli, 2015). It’s about being present as a human being first; as a therapist second. It’s about moving fluidly between a triadic focus on the Other, Self and the relationship Between.  Here we see the relationship as giving access to the others subjectivity and as the vehicle for healing. There is constant dance where we go in and out of focusing on the client, on ourselves and on what is happening between.

Just how we put this relational dimension in action in therapy varies according to perspective and context (Paul & Charura, 2015). A key debate for integrative therapists, for example, is the extent to which we privilege the here-and-now inter-subjective relationship rather than the intra-subjective one where past developmental relationships are engaged transferentially.

For myself, I work relationally in a number of ways. My focus is on the client's own internal and external relational world while we also work together using our therapeutic relationship as a vehicle to explore the client's process: With increased self-awareness comes more choices about how to be.  I also often engage work with 'multiple parts of self'. Here I work relationally with different parts of my own and the client’s intersubjective selves.  I've always been fascinated by the multiplicities of our (inter-)subjective relationships. A client arrives in the therapy room carrying their 'selves' from different stages and areas of their lives along with the internalised voices of significant others.  I also arrive with my different 'selves' lurking. So who is talking to whom?  The key question for therapy then is how do we  understand – and work with - what seems to be the ubiquitous appearance of different ‘selves’ (of both client and therapist) in the therapy room?  While the metaphorical use of ‘selves’ can be a useful way of containing a felt sense of fragmentation, should our aim in psychotherapy be unification (i.e. where integration involves owning all the parts)? Or should we set aside ontological assumptions about the 'reality of these selves' and simply work with what/who presents itself/themselves?

In this opening ‘between ’ lurks ambiguity and unpredictability, together with the possibility of true meeting. Anything can – and does – appear.          (Finlay & Evans, 2009)

One notable example of relational research is the dialogal approach adopted by Halling and colleagues (Halling, Leifer and Rowe, 2006). Here, a group of phenomenologists investigate a phenomenon through dialogue which takes place both among researchers and between researchers and the phenomenon studied (Halling, 2008). Individuals share their experiences of the phenomenon, perhaps interview others, and then negotiate layered meanings collaboratively in the group until some consensus is reached.

Another way of working relationally is the co-operative inquiry approach of Heron (1996), stemming from the earlier New Paradigm Research (Reason and Rowan 1981).  This approach draws on some phenomenological ideas but also casts its net farther.  Non-phenomenological methods of collaborative, participatory action research also embrace relational principles (e.g. see the work of Reason (1994) and Morrow (Morrow and Smith, 1995) who offers an account of using grounded theory while working relationally with her participants. 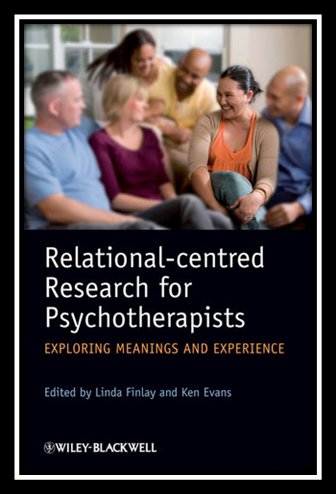 At the centre of our understanding (of both relational psychotherapy and relational-centred research) is a focus on the co-creation of the relationship as an interactional event, a constantly evolving co-constructed relational process to which client and therapist/participant and researcher, contribute alike and impact on each other in an ongoing way. The therapeutic relationship and the research encounter are thus both viewed by us as dynamic processes between people in mutual interaction and always unique, because of the separate individualities of the persons involved.

We believe that much of what we can learn and know about an Other is co-created and arises within the intersubjective space between researcher and co-researcher (Finlay, 2009).  Here we ally with the philosopher Martin Buber who maintained, the reality of the other - and thus our self - is to be found in the fullness of our open relation when we engage in our mutual participation (Buber, 1937).  Each person in the relationship touches and impacts on the other and that affects how any research unfolds.

We argue that a sensitive, ‘relationally-tuned’ attitude needs to be adopted in relational research which means letting go of control and committing to whatever arises between researcher and participant. It means not predicting, shaping or moulding the course or direction of the meeting by, for example, rigidly sticking to the six questions that have been devised for the semi structured interview or by getting so overly enmeshed and anxious about outcomes that we are not fully present. Committing to relational centred research requires the researcher to surrender both to the between and to whatever emerges into moment by moment awareness. Relational research does not just involve a participant-subject talking to a passive, distanced researcher who receives information. Instead the research data (and possibly the analysis stage as well) is seen to emerge out of a constantly negotiated, evolving, dynamic process. It is co-created – at least in part.

Four particular theoretical strands that explicitly intertwine in our relational approach to research are:   dialogical gestalt psychotherapy; existential phenomenology; intersubjectivity theory; and relational psychoanalysis. Feminist theory - particularly the role of reflexivity and collaboration - has also shaped our approach. In our relational-centred approach (as opposed to ‘method’), relational dynamics (be they conscious or out of awareness) between researcher and co-researchers are taken seriously and explored reflexively. This needs to be done without the researcher becoming excessively preoccupied with their own experience of the encounter (Finlay, 2002a; Finlay, 2002b).

Relational therapists and researchers face the challenge of bringing themselves fully into the room and dealing directly with the relational impasses that occur between therapist-client and/or researcher-participant. This calls for the ongoing monitoring of our responses in relation to the unfolding process.  A decision needs to be made about what is useful to share in the interests of deepening and widening the exploration. There are no easy rules in this regard it depends more on the ongoing awareness on the part of the therapist/researcher of his/her own counter transference and what  may be learned from this, combined with a careful and respectful attention to the needs of the other. At times, a researcher may use counter transference awareness indirectly to understand the other’s struggle/stuckness more clearly. At other times the researcher may choose self-disclosure, as above, as a more powerful and appropriate option. What all relational approaches share, however, is attention to the researcher’s/therapist's personal process as a valuable resource to deepen the focus on the co-researcher.

In our book, Ken Evans and I reiterate our belief that relational centred researchers need to consider the need for supervision from a researcher who is also a therapist. This will develop and grow awareness in the researcher of their own unconscious processes that co-create with an other(s) to hinder, restrict, limit, or in some way curtail the work. This work needs to be conducted with curiosity and not judgment, since the latter promotes shame while the former supports a deeper level of reflexive practice where ‘mistakes’ are viewed with curiosity and as a path to growth and learning.

From the above, you will see that there are many parallels between relational centred therapy and research, namely related to a:

However, there are also significant and distinct differences and the two should not be confused. Research and therapy are different in their:

Here is a video of a keynote speech I did on relational centred research at a conference in October 2017 (Practice and research in psychotherapy: challenging partners or tango dancers?) at the Educatieve Academie, Antwerp, Belgium : https://educatieve-academie.be/ :

Finlay, L. (2002b). Negotiating the swamp: the opportunity and challenge of reflexivity in research practice, Qualitative Research, 2, 209-230.

Paul, S., & Charura, D. (2015). An Introduction to the Therapeutic Relationship in Counselling and Psychotherapy. Sage.

I take data protection and confidentiality seriously. If you contact me by email, I will hold onto your data only while processing your communication. I will not copy, share or use your personal information without your consent.  Once you have signed a contract to begin therapy, then please note that personal data and brief notes related to our psychotherapy work are collected. These notes are stored safely and securely. You can have an electronic copy at any point upon request. Our email communications will be deleted after we are no longer working together.

Please note that, like most websites, this site uses browser cookies to allow analysis of pages visited and to display videos. I use Google Analytics to determine how many people are using my website and which bits are of interest. None of this information identifies anyone personally.  To continue to use all functions of this site please confirm that you agree to the use of cookies. You can change your mind at any time by clicking the 'Delete Cookies' button at the bottom of this page. Disabling cookies on your internet browser should stop Google from tracking any part of your visit.